The future of Avros Football Club looks bright thanks to the generosity of Vestacare who have agreed to sponsor the club. Vestacare have even supplied a 16-seater minibus to the club which means that they can travel out of the borough. The club have teams from under seven right through to open age and play their home games at the Vestacare Stadium having moved in earlier this year after being formed back in the 1930s. Vestacare have their own box which the people we support can use whenever they want.

The directors wanted to put something back into the community and with each team donning the new kit sponsored by the company there is a real professional feel to the club from the first team down to the youngest age groups and with the financial backing it means that players of all ages have a great place to play and enjoy their football. 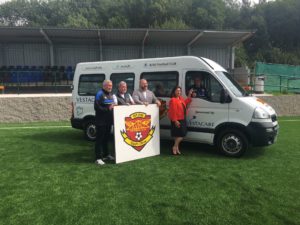